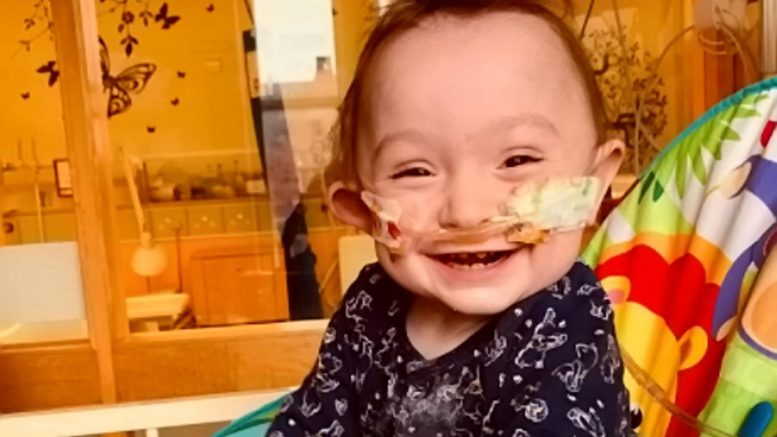 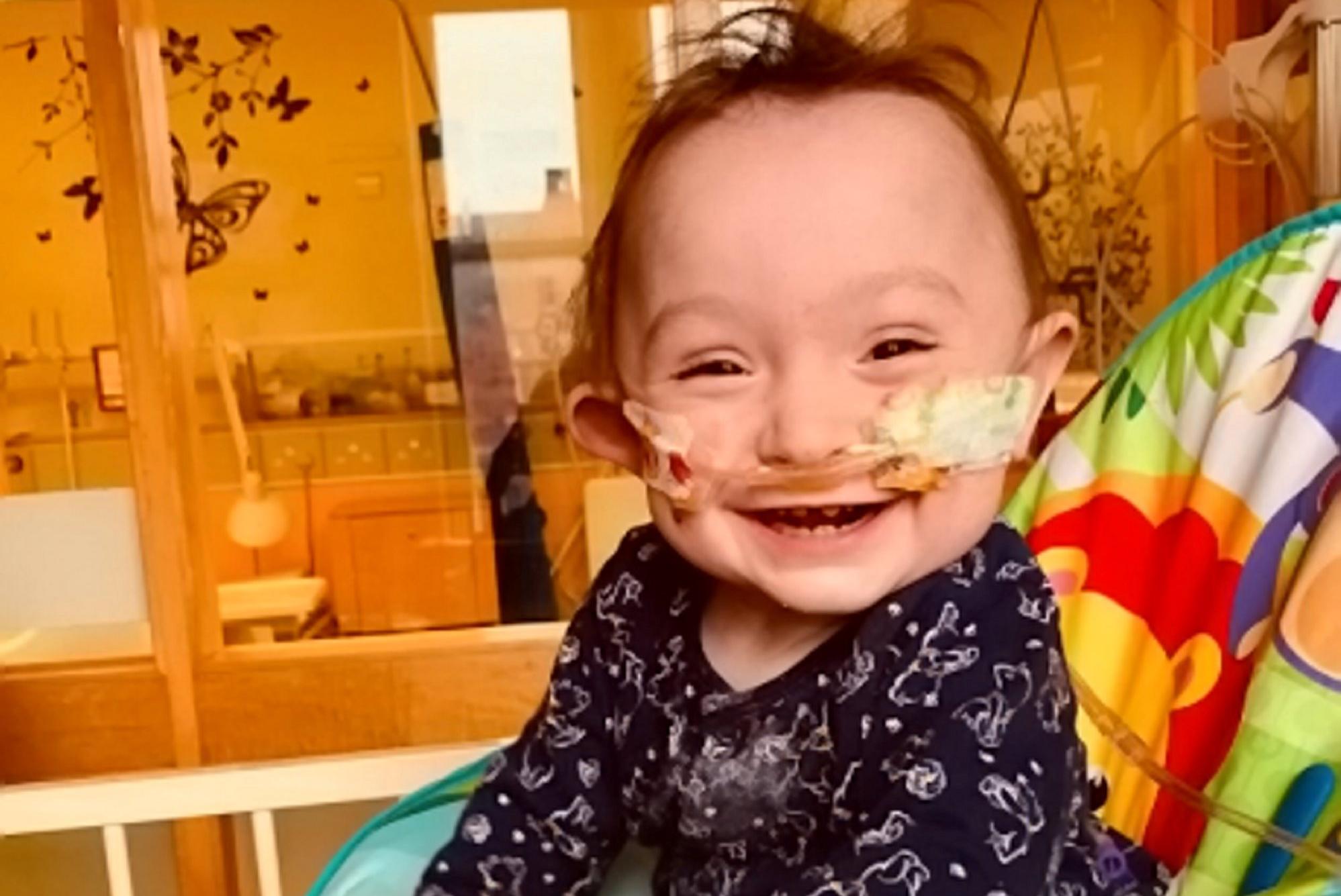 Distraught mum Michaela Lugton, 21, and dad, Barry McLachlan, 37, watched as their little boy, Noah, took what should have been his final breaths in March 2019 at Edinburgh’s Royal Infirmary.

Their son had been rushed straight into the neonatal intensive care unit and placed on a ventilator as soon as he was born as he was so tiny he wasn’t able to breathe properly after arriving 13 weeks prematurely – at 22 weeks – on 3rd March 2019 weighing a tiny 1lb.

During his nine-month stay in hospital, Noah suffered from collapsed lungs, a grade two bleed on the brain, multiple bouts of sepsis, chronic lung disease and endured 12 operations including eye surgery.

A young family from Edinburgh witnessed a miracle when their 1lb baby came back from the brink of death, after doctors suggested they turn off his life-support six times.

Michaela had issues with her pregnancy right from the beginning, when she experienced heavy breathing and sickness – the couple were told their baby would have no chance of survival if it was born as early as 22 weeks, two weeks before the cut off for a termination in the UK.

Doctors suggested the couple turn off Noah’s life support SIX times to let him slip away naturally, but they refused, praying their little boy would fight his way to full health.

Miraculously, Noah pulled through and in December 2019, he was discharged and he is now at home in Edinburgh, Scotland – on oxygen and a feeding tube, but in his proud parent’s arms.

After a recovery which stunned both his parents and medics, Noah has been declared a healthy little boy.

During his nine-month stay in hospital, Noah suffered from collapsed lungs, a grade two bleed on the brain, multiple bouts of sepsis, chronic lung disease and endured 12 operations including eye surgery.

Delighted Michaela, a stay-at-home mum, said: “I was so happy when I found out I was pregnant, as I had previously suffered from a miscarriage.

“Noah is the sweetest little boy and I couldn’t be prouder of him.

“We were devastated when we thought we might lose him and despite being told six times to turn off his life-support and let him pass away, we refused.

“We were desperate for him to fight – and he did.

Their son had been rushed straight into the neonatal intensive care unit and placed on a ventilator as soon as he was born as he was so tiny he wasn’t able to breathe properly after arriving 13 weeks prematurely – at 22 weeks – on 3rd March 2019 weighing a tiny 1lb.

“He’s been through so much already but never stops smiling.

“Seeing him do so well every day is so rewarding – he has completed our lives and brings me so much joy every day.”

After Michaela and Barry met in a Tesco car park in Edinburgh in November 2017, it was love at first sight and the couple decided they wanted to start a family together.

However, Michaela suffered a miscarriage in April 2018.

But in December 2018, Michaela found out she was pregnant again and the couple were thrilled, however, they didn’t want to get their hopes up due to what had happened with the previous pregnancies.

Michaela said: “When I suffered my previous miscarriage, doctors found that I have a bicornuate womb – which just means my womb is heart-shaped, but shouldn’t affect fertility.

“As soon as I found out I was pregnant for the third time, I was in and out of the hospital as I was very ill, constantly being sick and bleeding.”

Michaela and Barry visited Edinburgh Royal Infirmary weekly, with doctors becoming more concerned with the progression of the baby as the pregnancy went on.

On February 24th 2019, Michaela’s waters broke when she was only 22 weeks pregnant.

Michaela said: “When my waters broke I was devastated.

“My previous pregnancies had ended so early, and I finally felt like this one was going to work out and I was going to get my baby.

“Doctors had been giving me steroids just in case I went into early labour, so luckily I was prepared.”

Michaela was asked to stay in the hospital for a week, where she was constantly monitored and was technically in labour – it was then that the couple received the news they had been dreading.

“They told us that our baby was 100% not going to survive, as I was only 22 weeks pregnant,” Michaela said.

“There was nothing that I could do except beg the nurses and doctors to help me, and to try and save my child.”

Michaela had felt the urge to push throughout the entire week of being in the hospital, and when nurses checked her cervix a week later, on March 3rd 2019, they found that it was 4cm dilated.

Weighing in at 1lb, little Noah fought to take his first breath.

Michaela said: “I was terrified – doctors had already told us that he wouldn’t survive, so I was just begging them to try and save him.

“I was confused and didn’t know what was going on, but I knew that they would do their best for my little boy.”

Noah was put into a plastic bag and doctors placed a ventilator tube down his throat to help him breathe, before he was put in an incubator.

Devastated Michaela said: “It had been four hours since the birth and I still hadn’t seen or held my baby.

“All I wanted to do was to wrap him up and take him home with us, but I knew that hospital was the best place for him.”

The same day, Michaela and Barry were told to expect the worst, and that Noah wasn’t going to make it, so the best option was to turn off his life support.

Michaela said: “It was horrible, but Noah wasn’t in any pain or struggling in any way, so we didn’t go ahead, and refused.

“The doctors allowed us to take him out of his incubator as he was expected to pass away that evening, so we wanted to make some memories.

“We cuddled him and printed his feet, making the most of our little boy.

“When he got cold he was placed back inside his incubator, and we prepared to watch our baby peacefully pass away.

“But soon 4am the next day rolled around, and our baby was still here.”

The couple spent the next day by their baby’s side, constantly watching him in case he should slip away in front of their eyes.

However, soon things became more serious – Noah developed Necrotizing Enterocolitis (NEC) – a disease that affects the intestines of premature babies, caused by the wall of the intestine being invaded by bacteria which can cause it to be destroyed.

At only a day old, Noah was rushed for surgery with a 50/50 chance of survival due to being so tiny.

Eight hours later, Noah came out of surgery with a stoma – an opening in his lower abdomen allowing body waste to be excreted – and was placed back into his incubator.

Michaela said: “We thought the worst had already happened, but then two days later, the stoma slipped out and we had to go through the whole surgery process again.

“It was just a long series of horrible events – the stoma was reinserted, but then Noah developed NEC two more times – each time requiring surgery.”

Throughout the whole process, which lasted around nine months, Barry and Michaela were told that they should turn off Noah’s life support machines six times – each time they refused.

Barry said: “He wasn’t in any particular pain and didn’t appear to be struggling at these times, and we would have preferred to see him die peacefully when he was ready, rather than the machine being turned off.

“We weren’t ready to lose him, and he obviously wasn’t ready to die. “He kept on fighting.”

Finally, nine months later, Noah was allowed to return home with his mum and dad, with feeding and oxygen tubes fitted.

During his time in the hospital, little Noah endured 12 operations including eye surgery, collapsed lungs, a grade two bleed on the brain, multiple bouts of sepsis, and chronic lung disease which he still suffers from today.

The amazing little boy turned one in on March 3rd 2020, and is doing incredibly well.

Michaela said: “He still suffers from lung disease and has an oxygen tube fitted, but considering everything he has been through, he is doing amazingly well.

“To think that we could have turned off his life support is horrible.

“He’s here with us now and he is everything we wished for.

“Everything Noah has been through has made him so much stronger, and made us as parents appreciate him endlessly.”

Noah is now living at home with his mum and dad, but still requires check-ups.

Michaela said: “He is doing amazingly well, and has regular checkups with various nurses, doctors, and has speech and language therapy too.

“I want other premature baby’s mums to know that there is always hope.

“Even when it seems like the world is against you and your baby, there is always a chance you can make it out the other side.”

A Message from the Editor

Bogus workmen warning: Edinburgh police say these are the signs to look out for