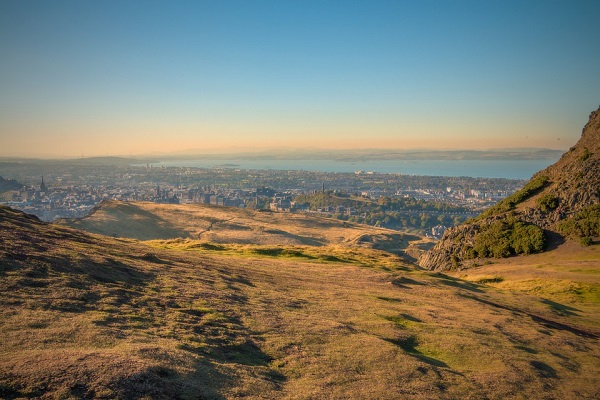 Arthur's Seat is the main peak of the group of hills in Edinburgh, which form most of Holyrood Park, described by Robert Louis Stevenson as "a hill for magnitude, a mountain in virtue of its bold design". It is situated in the centre of the city of Edinburgh, about 1 mile (1.6 km) to the east of Edinburgh Castle. The hill rises above the city to a height of 250.5 m (822 ft), provides excellent panoramic views of the city, is relatively easy to climb, and is popular for hillwalking.

Though it can be climbed from almost any direction, the easiest and simplest ascent is from the east, where a grassy slope rises above Dunsapie Loch. At a spur of the hill, Edinburgh Crags has historically been a rock climbing venue with routes of various degrees of difficulty; however due to hazards rock climbing is now restricted to the South Quarry and a free permit is required.

Holyrood Park is a short walk from Edinburgh’s Royal Mile in the heart of the city. It is a 640 acre Royal Park adjacent to Holyrood Palace.

The parks highest point is Arthurs Seat, an ancient volcano, giving excellent view of the city; it is also the site of a large and well preserved fort. This is one of four hill forts dating from around 2000 years ago. With its diverse range of flora and geology it is also site of Special Scientific Interest.