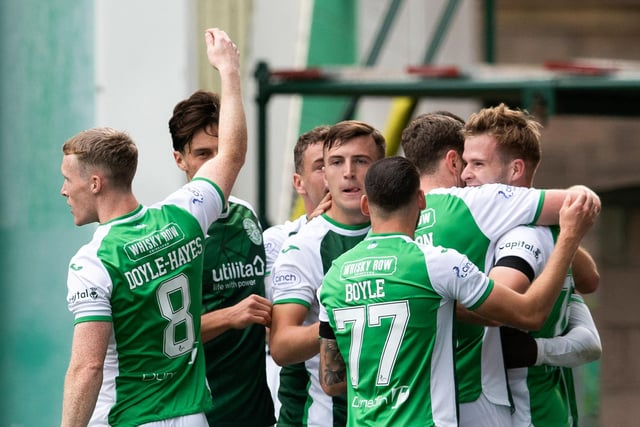 Josh Campbell, centre, is already on five goals in all competitions

The 22-year-old midfielder struck twice in ten minutes to secure a 3-1 victory for the Easter Road side over ten-man Aberdeen on Saturday and although much of the post-match discussion has centred around the penalty awarded to Hibs and subsequent red card for Dons defender Liam Scales, club captain Paul Hanlon highlighted his fellow academy graduate’s role in the response to going a goal down.

“We knew going into the match it was a big one for us. Off the back of the Kilmarnock win, we were trying to build momentum and it has set us up nicely going into the international break,” Hanlon told HibsTV.

“The response to going a goal behind was great. It was disappointing to lose the early goal but we didn’t let it affect us and we got back into the game and stayed on the front foot and tried to create as much we could.

“We kept going and the sending-off changed things. We managed to steamroller them in the end and it was an onslaught in the second half.”

Hibs could well have finished the game with more than the three goals they managed, with Campbell, Mykola Kukharevych, Chris Cadden, and Joe Newell all going close in the second period.

“When you’re playing against ten men, sometimes people just expect it to be easy but it’s not always the case,” Hanlon continued.

“The fans stuck with us – they showed the patience in the stands that we were showing on the pitch and we got there in the end and picked up a big three points.”

Hibs are starting to show signs of clicking under Lee Johnson and Hanlon believes Campbell can play a key role in things.

“I was saying to Josh after the game that he is definitely a goal threat. He should be aiming for at least ten or 12 goals because he is capable of that.

“In football, your form can go up and down in your career throughout the course of your career but it is about how you respond. There is no doubt that Josh’s response has been fantastic – especially this season.”

Murrayfield in line to host first test event with fans

Have Hibs had the youngest starting line-ups in the Scottish Premiership so far?

No sympathy from Hibs as they crush Covid-hit St Mirren