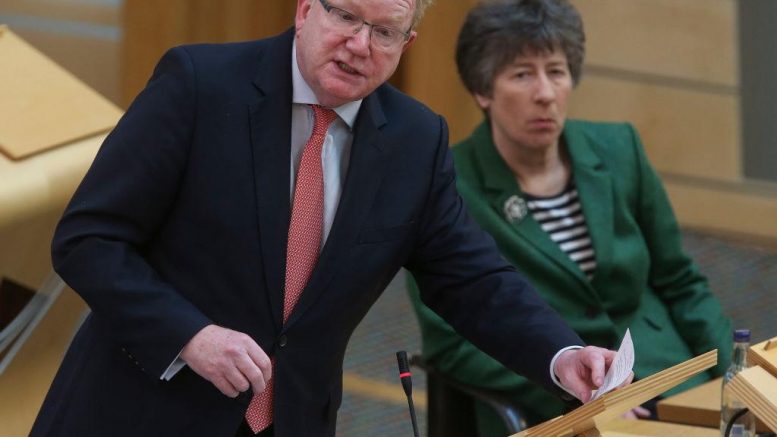 Jackson Carlaw MSP has resigned as leader of the Scottish Conservatives this afternoon, after just six months in the job.

The 61-year-old said had concluded that he is not the best person to lead the case for Scotland remaining in the United Kingdom.

He had only served in the position since February this year, taking over from Ruth Davidson MSP.

Jackson Carlaw has resigned as leader of the Scottish Conservatives. (Photo by Fraser Bremner – Pool/Getty Images)

In a statement, Mr Carlaw said: “Over the summer I have had the chance to think hard about my role as leader of the Scottish Conservatives.

“Nothing is more important to me than making the case for Scotland’s place in the United Kingdom.

“I believe the Scottish Conservative and Unionist party is the most important voice in Scotland for setting out that positive argument. I am clear that nothing must get in the way of doing so.

“In the last few weeks, I have reached a simple if painful conclusion – that I am not, in the present circumstances, the person best placed to lead that case over these next vital months in Scottish politics prior to the Holyrood elections.

“Given the importance I attach to the job, I’ve therefore decided to stand down with immediate effect.

“It is not an easy call but I have spent a lifetime in politics holding to the maxim that party and country comes first.

“I believe I am doing my duty by holding to that view now.

“I simply believe that a new leader will be able, as we recover from the COVID emergency, to make the case for the Scottish Conservatives and the Union better than me. That is all that matters.

“I leave the job with genuine pride at my time in office, both as interim leader and as leader for the last year.

“I especially enjoyed the eight years as deputy leader and being an integral part of the success achieved.

“Managing the transition from Ruth Davidson’s leadership to a refreshed party has been a challenging task but I feel confident that I leave the role with the party in good heart and, crucially, with time to elect a new leader so he or she can prepare for the elections next year.

“The Scottish Conservatives will fight those elections as we have always done – as the one party that will unequivocally speak up for all those Scots who do not want to go back to more division, but instead want our country to move on, as part of the United Kingdom, able to rise to the challenges of the future.

“I will fight that cause hard for these next few vital months as a loyal member of my party.”

Reacting to the news, Prime Minister Boris Johnson said: “Jackson Carlaw has been a tremendous servant to the Scottish Conservative Party for more than four decades.

“As an activist, deputy chairman, deputy leader and leader, he has given his all and deserves our thanks for his efforts.

“It is a mark of his commitment to the cause that he chooses to stand aside at this time and I offer my best wishes to him, Wynne and the family.”

The departure leaves the Scottish Tories without a leader for the second time in a year.

Ruth Davidson quit the position suddenly in August 2019, citing both “professional and personal” reasons for the move.

The hunt to find her successor was delayed by December’s general election, with Mr Carlaw, who had been her deputy, serving as interim leader before being elected into the job in February.

In that ballot he defeated the more right-wing Scottish Tory social security spokeswoman Michelle Ballantyne by 4,917 votes to 1,581.