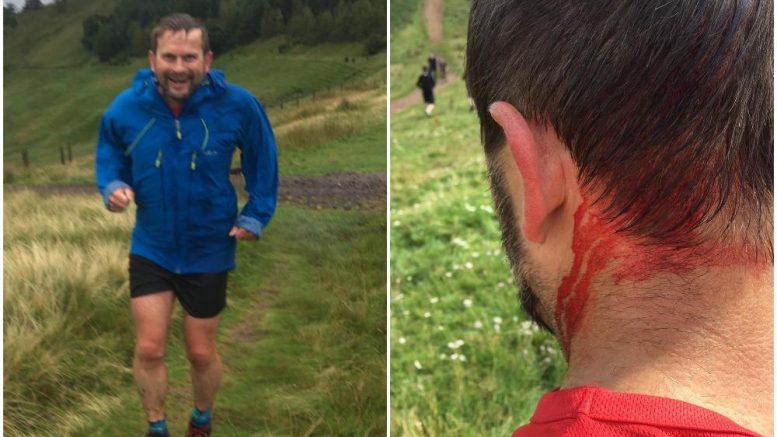 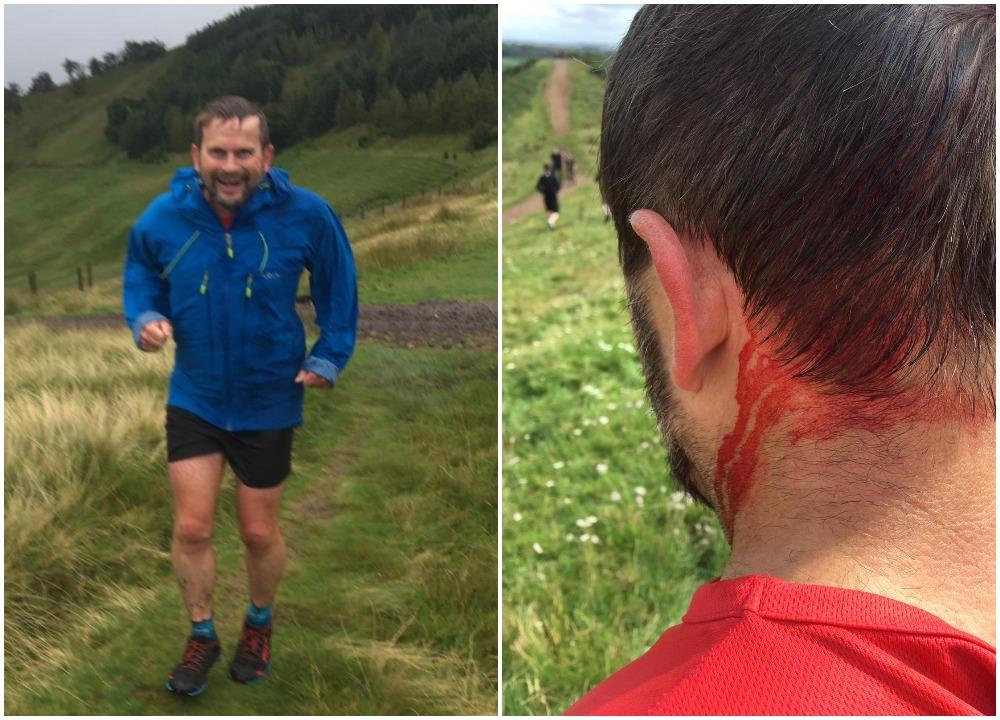 Mr Hartree warned others to avoid the cows.

A hill runner was left bloodied and bruised by a cow in the Pentlands after he unwittingly came between it and its calf.

Mark Hartree, 53, has warned other walkers and runners to exercise caution in the area after the incident on a public footpath.

Mr Hartree, a keen runner and president of Carnethy Hill Running Club, was taking part in a virtual extreme triathlon with a friend when he accidentally came between a cow and its calf on Turnhouse Hill.

Mr Hartree on the day of the incident.

The cow ran at Mr Hartree and knocked him into a broken wall, causing a cut to his head, and then stood on his legs.

It eventually retreated when Mr Hartree ‘punched’ it in the face with his palm.

He is still in pain after the incident, which happened on Saturday August 22, and has warned other walkers and runners not to make the same mistake.

Rangers have placed signs in the area warning people to avoid the cows after Mr Hartree contacted them.

Mr Hartree cut his head when he was knocked over.

Mr Hartree was running from Carlops to Flotterstone with a friend, and was walking down Turnhouse Hill through fields when he came across a herd of cows on the public footpath.

Mr Hartree, who lives in Edinburgh but grew up in Kent next to a dairy farm and is used to encountering cows on his running trips, felt confident enough to shoo the cows away from the footpath.

However, he did not realise that there were also calves in the field, and that he had unwittingly attempted to shoo a cow away from her calf.

“This cow ran at me and knocked me over onto a broken old wall,” he said.

Mr Hartree, a keen runner, completing an event on a different occasion.

“I cracked the back of my head on the stones and then had this cow thrashing around on top of me, with its head trying to maul me.

“I was lying on my back and partly on my side, trying to protect myself, and the cow was right on top of me. Its legs made me collapse, I couldn’t move my legs.”

Mr Hartree said he fought to remain conscious after the knock to the head, knowing he needed to try and protect himself.

“I thought I could try and kick the cow but then I realised I couldn’t move my legs because a cow was lying on them,” he said.

“I tried pushing it away and then it seemed to get up and run at me again, and smacked into me again.

“I ended up punching it with my palm in the face, and then eventually it moved back.”

Mr Hartree’s friend Mike then helped him get over the fence into the next field.

“I was really winded, and there was blood pouring off the back of my head,” said Mr Hartree, who had bruises to his legs, hips and back, as well as scratches all over.

He managed to ‘hobble’ back to the start of the trail and make his way home.

Now Mr Hartree wants others to be more careful.

“It’s my fault, I was complacent, I was overconfident probably, I didn’t realise there were calves in the field until we were committed,” he said.

“My message to everyone is don’t go anywhere near these cows.”

City of Edinburgh Councillor Neil Gardiner, Convener of Pentland Hills Regional Park Joint Committee, said: “We were very sorry to hear about the injuries received by Mr Hartree and wish him a speedy recovery.

“Our Natural Heritage Officers have been in touch with him directly about the incident and signs have been installed in the area reminding all visitors of safety precautions needed in the regional park.”

Subscribe to the Edinburgh Evening News online and enjoy unlimited access to trusted, fact-checked news and sport from Edinburgh and the Lothians.