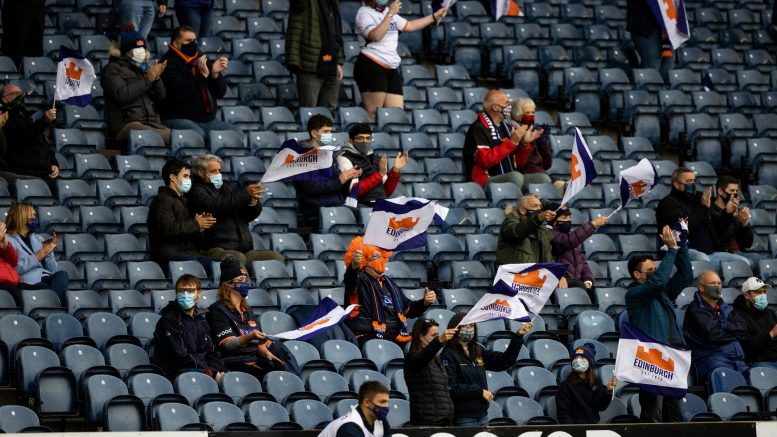 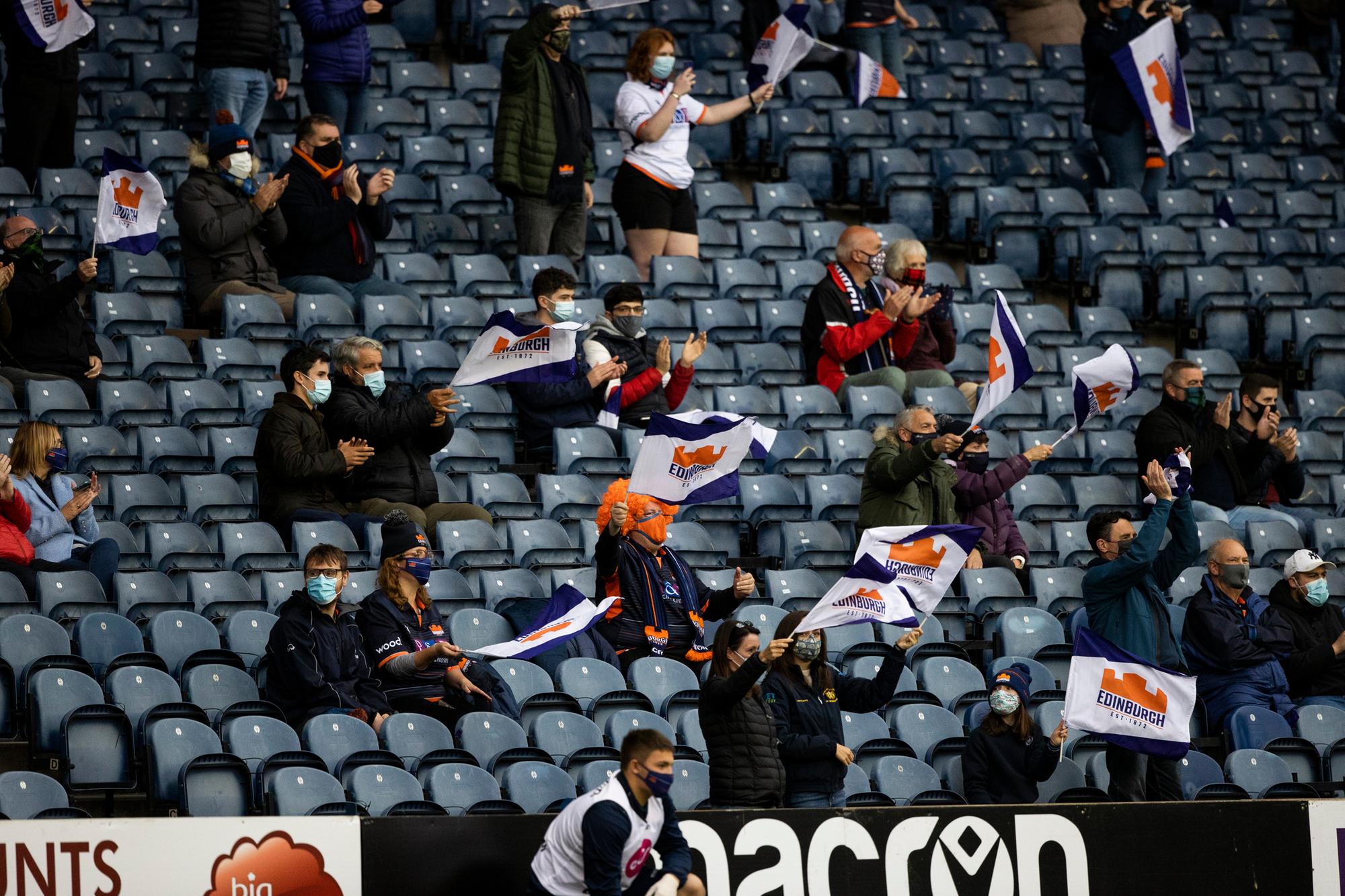 Glasgow pooped a sedate party at BT Murrayfield as the 700 Edinburgh fans who were the first to enjoy being at a sports stadium since the beginning of the Covid-19 shutdown saw their side beaten 15-3 in the last round of the Guinness Pro14 season.

Richard Cockerill’s side move on to more challenges in next Saturday’s home semi-final against Ulster and in Europe but it was counterpart Danny Wilson who celebrated his first win as new Warriors head coach.

Tries by Fraser Brown on his 100th appearance for the club and wing Ratu Tagive secured the victory, aided by the boot of Adam Hastings.

Fraser Brown scores a first half try for Glasgow Warriors on his 100th appearance for the club.

Around an hour before kick-off the pioneering punters who were the first to attend a pro-team match in the country since Edinburgh hosted Cardiff in late February began drifting into the East Stand in their household groupings and well socially distanced.

Gray, who was due to make his second appearance since returning to his home club in the summer, had been withdrawn from the Warriors bubble as a member of his family is awaiting the result of a coronavirus test. He was replaced in the second row by Rob Harley alongside Scott Cummings, with Kiran McDonald coming on to the bench.

Edinburgh started positively and won a penalty within five minutes as they looked to build on that 30-15 win over the same opponents last Saturday and build towards next weekend’s semi-final. It provided the first test for 20-year-old stand-off Nathan Chamberlain on his first start for the club but he was wide with the attempt.

Fans watch from the stands for the first time since March as Glasgow’s Tommy Seymour goes for a high ball at BT Murrayfield. Picture: SRU/SNS Group

Chamberlain and Charlie Shiel formed a youthful half-back combination in a team that had ten changes, although still a spine of strength and experience. Despite being named in the second-row, Scotland cap Nick Haining dropped back into blindside position in the scrum, with the returning Magnus Bradbury moving up to partner rookie Jamie Hodgson.

Glasgow made the most of the reprieve and got on the front foot, scoring from their first real opportunity as skipper Brown peeled off a maul and powered over for the try, which Hastings converted to open up a 7-0 lead on the ten-minute mark.

The rest of the half became a bit of an arm wrestle but Glasgow ended pressing hard. Twice they thought they had got over but on both occasions fell short, the second when Brown was denied by knocking on over the line.

Like the previous weekend it was the Warriors who held a slender advantage at the break.

Edinburgh changed their entire front row just three minutes after the break as Rory Sutherland, Stuart McInally and WP Nel were thrown on to lead a scrum which had been second best to that point.

Glasgow were getting a better share of the referee’s decisions than they had six days previous, to the audible disgust of the Edinburgh coaching team in the West Stand, and a slick move off a scrum saw Hastings ghost forward and George Horne’s grubber forced Edinburgh back to their line but on their own throw-in from which they earned a relieving penalty.

It was low-key stuff, much poorer than the decent amount of entertainment provided in the 1872 Cup decider as the relatively meaningless nature of this encounter began to set in.

Cockerill began withdrawing players he will be relying on to lead the charge against Ulster and Watson was duly replaced by Luke Crosbie.

Bill Mata began to find a bit of room to express his talents but Edinburgh were penalised and a quick tap penalty by sub scrum-half Ali Price changed the momentum. Glasgow finally got their backs going and Stafford McDowall and Jones opened the door for Ratu Tagive to crash over in the left corner bang on the hour-mark.

Hastings couldn’t make the touchline conversion but it felt a crucial breakthrough as the Warriors opened up a nine-point gap. The visiting stand-off was on the mark minutes later with a penalty which cemented Glasgow’s lead and all but sealed the win heading into the last ten minutes.

A rare home defeat for Cockerill’s men on home turf but one that will be more remembered for the novelty of paying supporters after a six-month absence and the challenge of more meaningful tests ahead.

No sympathy from Hibs as they crush Covid-hit St Mirren

Murrayfield in line to host first test event with fans