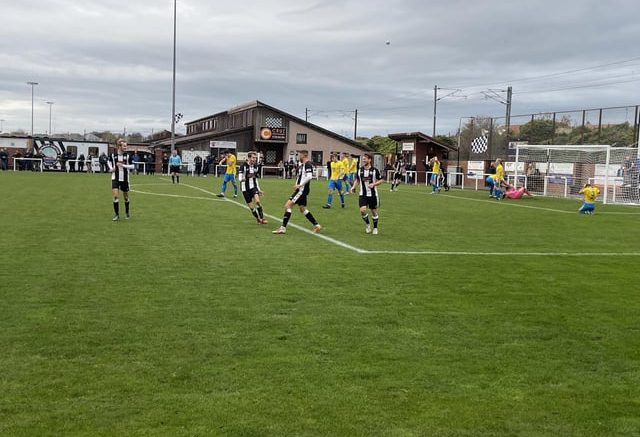 The East Lothian club moved three points clear thanks to Michael McFarlane’s late winner over Dunipace secured a 1-0 victory, while Newtongrange Star, who started the day in second spot, suffered a 2-1 defeat at Kinnoull.

Having suffered relegation from the Premier Division last season, Dunbar are looking for an immediate return to the top tier, and Haynes is confident his side can maintain top spot.

“It’s a huge three points,” said Haynes. “I said to the boys after the game that that’s us a third of the way through the season and we are top of the league. I think over the course of ten games we probably could have done better, but I am delighted to be where we are, at the end of October and top of the league. It’s about building on that now.

“It’s the best we have played this season. In the first half we were well on top and we were really unfortunate not to be winning, we played some good stuff and deserved to be ahead at half-time but we weren’t. The message to the boys was to not get desperate and to keep doing what we were doing, and a goal would come.

“I was confident we were going to score. The hard part is Dunipace are free-scoring, and would we keep them out? We have done, we are unbeaten home and we have taken clean sheets against free-scoring Luncarty and free-scoring Dunipace now.”

McFarlane came close to opening the scoring for the hosts after 14 minutes, but Dean Whitson got in his way as he shaped to shoot, allowing Dunipace goalkeeper Alexander Gilchrist time to set himself to make the stop.

A minute later and Dunbar should have had a penalty as Ben Bathgate was wiped out, but referee Iain Gallacher waved play on.

Darren Handling had the home side’s best chance five minutes before the interval after Bathgate put him clean through, only for Gilchrist to thwart him.

The home side maintained their dominance in the second period with McFarlane going close with a header from Bob Berry’s cross, before striker Jonny Grotlin audacious overhead kick was on target.

With 11 minutes left on the clock, the home side finally made the breakthrough, as club top goalscorer McFarlane fired high into the unguarded net after Gilchrist had came for, and missed, a ball into the area.

Next up for Dunbar is a trip to joint-second Glenrothes next Saturday, with the Seasiders aiming to stretch further clear.

Haynes added: “It’s a huge game next week, it’s first v second. It’s where we want to be though; we want to be playing against teams who are up the top of the league, and if we can take points against them, they become double points almost. Our aim is to stay top of the league for as long as we can. At home, on our day, we will beat anybody at home and if we can keep picking points away from home, we won’t be far away.”

Who is referee for Rangers v Celtic and all cinch Premiership and Scottish Championship fixtures?